In line with this, it has successfully kicked off the SEA Dragon Venture Platform which aims to connect scale up companies in Malaysia and Southeast Asia with global venture capitalists, corporate investors and high net-worth individuals.

In Malaysia, it is fairly easy for a good start up company to get funding as there are many Government agencies that offer grants and funds. The problem starts when these companies, after a few years of operation, need extra funds to invest in their product or services to make them commercially viable. These companies, now known as scale ups, face problems in getting funds as there is no funding ecosystem in place for them to get the financial help.

This is where PIKOM Venture Investment Chapter (VIC) comes in. It was set up with the express purpose of bringing in foreign investments in the form of venture capitalists, high net-worth individuals and corporate investors to help start up and scale up companies get the financial help that they need, to mentor these entrepreneurs and to help them with global market expansion.

Although the PIKOM VIC is only a few months old, it made a roaring start as its inaugural programme, SEA Dragon Venture Platform, was a huge success and garnered lots of media coverage. SEA Dragon, organised in collaboration with Malaysia Digital Economy Corporation (MDEC), will be

an annual sustainable Venture Pitch Platform for Southeast Asian scale- ups for investments, growth and global market expansion. The amount of funding to be raised will depend on the companies and can range from US$1 million to US$25 million (RM97.48 million).

PIKOM VIC Chair C.S. Chin was very pleased with the response to the inaugural SEA Dragon; it attracted more than 170 companies from Malaysia and Southeast Asia. This number was whittled down to 32 companies in the final list where they were given the opportunity to pitch their ideas to the investors.

Chin was very proud that 60% of the companies that made the final list were from Malaysia. “I was very happy to see so many Malaysian companies coming up with good ideas. I noticed that their biggest drawback was they did not know how to pitch their ideas effectively. One of the biggest takeaways for them from this programme was how to get across their business ideas effectively and quickly. Just a few days with us and you could see the huge improvement in them. Our young people are willing to learn and have good ideas.”

Pitching a company’s idea to venture capitalists is a “science”. These companies have only three to five minutes to get the attention of these venture capitalists in order to get them interested in investing in their scale ups. If they mess up this opportunity, they might not get a chance again as it is very difficult to get these people again.

Realising the importance of the pitching session, the organisers of the SEA Dragon brought in three coaches from the Silicon Valley in the United States to train the participants for four days on how to pitch their ideas to a gathering of over 30 venture capitalists and high value individuals from the United States and China.

The start-up companies have not been forgotten either. “PIKOM SEA Dragon Venture Platform is the first in a series of events that will take place this year. We will also be announcing an event exclusively for start-ups to be held at the end of the year,” said Chin.

Sean Seah, Deputy Chair of PIKOM VIC, explained the emphasis on scale ups for the SEA Dragon. “Scale up companies are the future of the country. If we don’t take care of them, they will go to other countries like Singapore. That’s what happened to Malaysian companies like Grab. It is now forever linked to Singapore although they started in Malaysia.”

There are also many high value asset individuals in China who are investing not only in their own country, but also looking to invest elsewhere too.”

With much attention focussed on China, Southeast Asia, regarded as the hottest and fastest region in the world in terms of e-commerce, is being left out. “That’s why we mooted the idea of SEA Dragon. We want to show the world that we, not only Malaysia but the whole region, have what it takes to be an ICT powerhouse. We want Malaysia to be the gateway for scale up ICT companies in Southeast Asia. In this way, we can attract the attention of venture capitalists, most of whom are present in Singapore and looking for companies to invest there while Malaysia is often overlooked.” 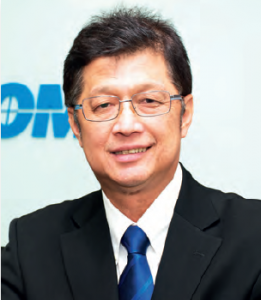 I was very happy to see so many Malaysian companies coming up with good ideas. I noticed that their biggest drawback was they did not know how to pitch their ideas effectively.

Scale up companies are the future of the country. If we don’t take care of them, they will go to other countries like Singapore.

While scale ups face challenges in Malaysia as far as start-ups are concerned, Malaysia is still a good country for them to start their business, said Seah and Chin. “Malaysia is a good environment and test base for start-ups,” said Chin. “Some of the things working in our favour are our good Internet connection, which is among the top 50 in the world, and our proficiency in the English language.

“However, one of our major setbacks is the lack of a good funding ecosystem and a support system for such companies. In Korea and Taiwan for instance, there are programmes to mentor and groom young start up entrepreneurs, rental free factories for them to operate from until they start earning revenue, etc. There’s nothing like that here. Maybe it’s something that the Government needs to look into.”

Seah concurred with Chin. “Malaysia is still one of the best places in Asia in terms of starting a company. That’s why, after working in China and Hong Kong, I decided to come back to Malaysia to start a company. But I noticed that in the last 18 months there has been some slowdown.

Government funds for start-ups are dwindling. Malaysia used to be a haven for start-ups, especially when Tun Mahathir was the Prime Minister and he was selling the idea of the Multimedia Super Corridor (MSC) to the world in the 1990s. You could try out new ideas, start a company with just RM2, etc.

“However, after Tun Mahathir retired in 2003, the developments were not in line with the vision of MSC that he had. We are in danger of losing the advantages that Malaysia had to other countries in Southeast Asia. Now that Tun Mahathir is back in the driver’s seat, we hope we will once again become the hub not only for start-ups but also for ICT in the region.”